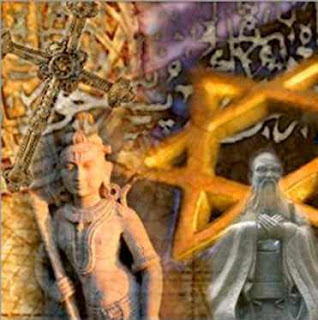 One of the major absurdities of modern human societies are the concept of "Freedom of Religion" and "Separation of Church and State".
Religion is a term, which summarizes every kind of irrational human behavior. It is the antonym of education. When this relic of infantile behavior remains in adult human beings, it becomes a mental disorder.
How can a mental disorder claim freedom to be practiced? Freedom of Religion is essentially not different from "freedom of being schizophrenic" or "freedom to remain illiterate". Why should a state protect such aberrations or deficiencies of the human mind?
It is the duty of the state to encourage its citizens to seek education. This can be done by opening institutions of education like schools and universities to the public. Some states even provide free education to their citizens. But a school where religion is taught is not a school. Religion is the negation of everything education stands for. Students are supposed to acquire knowledge in schools and to learn methods of rational thinking. Religion does the opposite. It opposes and denies knowledge and discourages rational thinking. It is diametrically opposed to the efforts of a school.
The state therefore needs to protect children whose judgment can easily be influenced either in a positive or in a negative way from such harmful influences like religion, which could seriously threaten their mental health.
A school that permits the presence of religious teachings in its curriculum or religious symbols in its buildings and facilities is no school. And a state that permits them has failed its citizens and especially its future generation - its children.
Freedom of religion is no human right, because it is no individual right in its current definition. It is a violation of human rights, because it gives privileges to religious organizations so that they can break the laws and disrespect the individual rights of its members.
In the name of freedom of religion children are physically mutilated (circumcision) and coerced into boring and absurd rituals. Neither their human rights nor their dignity are respected. Therefore freedom of religion is not only no human right, but a gross violation of them. If privileges of religious organizations are protected by a constitution, it is a proof that the whole concept of human rights is not respected in this state.
Of course no citizen can be banned from believing whatever he wants and to practice whatever he wants in private. But this is not necessarily the case in public where it might become a nuisance for others (e.g. prayer in public places). When religions demand exceptions from laws, this is incompatible with the rule of law.
There are numerous examples where religious privileges are used to break laws and to undermine the principles of any legitimate state:


Privileges like these violate the principle of equality before the law and are unacceptable. A state that grants privileges to religious organizations is illegitimate.
The separation of church and state is one example of such illegitimate privileges. There can be no separation or non-interference between church and state. This means there can be no separate realm for religious institutions to practice their unlawful traditions. The church, which is named here representatively for all religious institutions, must remain below the state authority and has to obey to the law like any other citizen.
A state has to be committed to rationalism and should therefore not recognize any religious institution.
Religion is a permanent cause of intolerance, violence and social disorder. It does not respect state authority and the rule of law. It should therefore have no place in a modern state.
Therefore the only right that might be granted to adult religious people is not to be reeducated by force. But tolerance towards religion should not go any further.
Posted by Magister Mortran at 5:10 PM