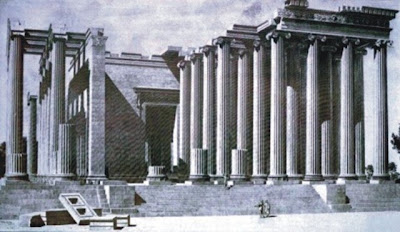 The continuous progress of human civilization was suddenly interrupted at the end of antiquity with the rise of Christianity to the head of the Roman Empire and its subsequent fall. No other event was so disastrous for the intellectual evolution of mankind. It was followed by an Age of Darkness that lasted more than a thousand years, until humanity began slowly to recover from the catastrophic effect that Christian monotheism had brought over it. It was the Renaissance (= Rebirth) of antiquity and its culture followed by the Age of Enlightenment that put an end to the decline of humanity.
However the cause of the decline is not dead yet and we can again see the deteriorating effects of this dangerous religion on the progress of humanity. Religion is again on the rise during the last decades, and it is accompanied by a visible stagnation of science and technology, a retrocession of humanist values and basic human rights and a resurgence of barbarism and violence all over the world. The disease of Christianity (including the Mohammedan sects) has not been eradicated while there was an opportunity for it. It will now continue to cause problems for mankind and obstruct any further progress.

The mistake was the attempt to jump from a monotheist religion right back to the path of reason and logic. Such an attempt was doomed to fail. Once you have taken a wrong road, you cannot just jump from there back into the right direction, when you realize that you have taken a wrong turn. You have to take all the way back to the point where you have left the right path and from there continue into the right direction.
There is no direct path from monotheism to reason. A Christian atheist still has tacit Christian doctrines implied in his thinking. For example whatever answer he gives to the simple question “Do you believe in God?” - whether “yes” or “no”, he already strays away from the path of reason and surrenders to multiple Christian fallacies. The preposition “in” makes no sense in conjunction with the verb “believe”. Why is the noun “God” capitalized? Where is its article?
Such an irrational question cannot be answered rationally and could only be countered with another question: Believe what about which god? Any answer would imply the concept of an omnipotent creator and the affirmation that such a concept is even thinkable. The whole question of the existence of “God” is meaningless from a rational point of view and commits the fallacy of presupposition (Plurium Interrogationum) since it presupposes statements that have not been agreed upon (that an omnipotent creator is a valid hypothesis, that the world has a beginning, that there can be a logical distinction between natural and supernatural).
Whenever such a Christian atheist makes a statement about ethics, he is also unaware that he implies tacit Christian values. He also uses a language polluted by Christian terminology that makes it difficult to express himself without falling into the mental trap of Christian concepts.

For a monotheist to embrace reason, it is indispensable to return to the pre-Christian concepts of thought first and at least formally learn classical mythology and adopt the customs and language of polytheist antiquity. This is the point in history, after which mankind strayed away from the path of intellectual progress.
Only a classical polytheist is able to overcome religious superstition. From monotheism there is no direct shortcut to rationalism. First all false concepts of Christianity and its spiritual predecessors like Zoroastrism have to be totally erased from the mind, before it is possible to advance on the path of reason.
Posted by Magister Mortran at 2:13 AM