Evidence for the Big Bang or Overinterpretation of Data? 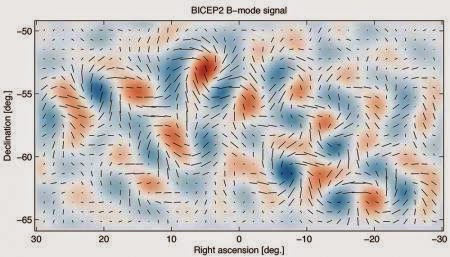 Some days ago the BICEP2 experiment made headlines in the news all over the world. The scientists claimed that they have found evidence for gravitational waves by measuring the polarization of the Cosmic Background Radiation (CBR). These gravitational waves were interpreted as observational proof for the Inflation theory, which is an essential part of the current Big Bang model. According to the enthusiastic reports in the press, Inflation can now be considered a scientific fact.
Actually Inflation (the expansion of the universe at a speed faster than light during the early stages of the Big Bang) has all along been treated as a scientific fact, because without it the Big Bang theory would have collapsed long ago. But now some scientists have become so bold to claim that they have empirical evidence for it due to the results of the BICEP2 experiment.

But what was actually observed by the BICEP2 experiment? They observed tiny pattern of polarization in the CBP. These patterns are so week that they could only be made visible by complicated mathematical procedures that took them several years. They have neither observed the Big Bang, nor Inflation, nor gravitational waves. These are all just interpretations of the polarization patterns.
The newly published paper of the BICEP2 project starts right away with a description of the Inflation model taking it for an established fact and then interprets the data based on this premise. This is a nice example of circular reasoning, starting the argument with the conclusion (Inflation is real.) as one of its own premises. Alternative explanations for the observation were not even considered. Of course the BICEP2 results are consistent with Inflation, but this is a typical feature of circular reasoning. It is consistent, but nevertheless a logical fallacy, since it does not prove anything.

But the main problem of the BICEP2 experiment is that it assumes that the observed pattern of polarization is really a property of the Cosmic Background Radiation, which is pretty far-fetched. The first assumption would normally be that the polarization pattern is the result from something that is between the CBR and the telescope.  We are talking about 13.7 billion light years here, so there should be enough stuff that can polarize the radiation.
The paper refutes this possibility that the pattern is caused by something in the foreground by stating that they measured no gradient in the polarization patterns towards the galactic plane, which would exist, when the effect was cause by interstellar matter inside our galaxy.
But the BICEP2 scientists overlooked the most likely cause for a foreground effect. It is not some galactic or even intergalactic dust. It is far more likely caused by the Oort cloud. 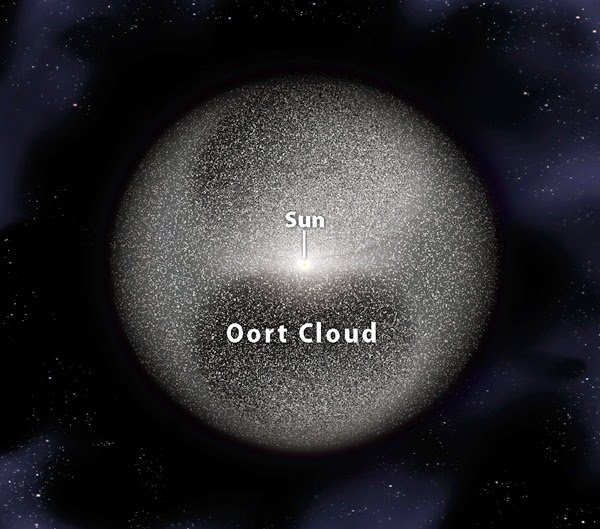 The Oort cloud is a spherical cloud of particles that surrounds our solar system. Whatever light or radiation we observe on Earth, it has first passed through the Oort cloud and will interfere with its particles.
This expensive and time consuming BICEP2 experiment has therefore not measured a phenomenon in the Cosmic Background Radiation, but patterns in the Oort cloud. The results are therefore useless to make any cosmological statements. The only way to exclude the effects of the Oort cloud on the measurement would be repeating the measurement in another star system, e.g. Alpha Centauri.
This shows once again that cosmological questions are a vain enterprise as long as we have not even left our own solar system. The mysteries of the universe cannot be solved from an armchair in our bedroom. Without interstellar space travel asking such questions is a foolish thing.
Again dozens of well-paid scientists have wasted their time and millions of taxpayer dollars for nothing. Nobody benefits from this kind of research. The only purpose is to defend the doctrines of the "scientific religion" that attempts to give the biblical creation story some "scientific" fundament.

Sorry, but the patterns in the Oort cloud that have been indirectly observed by the BICEP2 experiment allow no statements about gravitational waves, nor the Inflation theory.
Inflation remains what it has always been – pseudoscientific nonsense that is incompatible with Special Relativity.
Posted by Magister Mortran at 11:39 PM