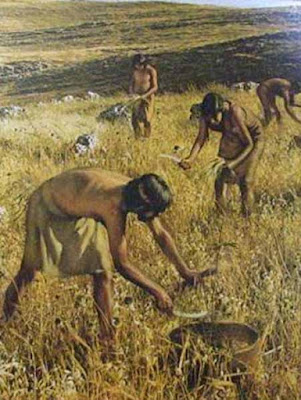 It's an idea that could transform our understanding of how humans went from small bands of hunter-gatherers to farmers and urbanites. Until recently, anthropologists believed cities and farms emerged about 9,000 years ago in the Mediterranean and Middle East. But now a team of interdisciplinary researchers has gathered evidence showing how civilization as we know it may have emerged at the equator, in tropical forests. Not only that, but people began altering their environments for food and shelter about 30,000 years earlier than we thought.
[...]

It all started about 45,000 years ago. At that point, people began burning down vegetation to make room for plant resources and homes. Over the next 35,000 years, the simple practice of burning back forest evolved. People mixed specialized soils for growing plants; they drained swamps for agriculture; they domesticated animals like chickens; and they farmed yam, taro, sweet potato, chili pepper, black pepper, mango, and bananas.

Those who read my book "Chronology of the Empire" might notice that the new time frame of human civilization coincides exactly with the theory that I presented in my book a few years ago. I had the year 45,360 BCE (beginning of the age of Sagittarius 0)as the beginning of human civilization. The number was deducted from hints in Sumerian mythology and the Kings List of Berossus and other Babylonian sources.
The so called Neolithic Revolution is the resurgence of humanity after the Great Flood, which was a very reel event that has been described independently by civilizations all over the world. This global disaster apparently refers to the end of the last glacial period, which had cataclysmic effects on the climate, the shape of the coastlines and human society.
In face of this new research everything falls in place and makes sense.
It is wrong to discard all mythology as fairy tales, because this was simply the way how history was remembered in the early days of human civilization. The questionable way how historians cherry-pick arbitrarily names from the same kings lists declaring some of them historic and others mythological fabrication has always astonished me. All Egyptian rulers in Manethos's kings list after Namer (=Menes) are historic, all dynasties before Namer on the same list are mythology. This is a totally arbitrary judgement that I am not willing to agree with. A historian should not discard kings, because he does not like the names, because they are the names of the Egyptian gods.
I am not saying that the theory in my book is true, but it made predictions, of which one has just been confirmed by this new study of Patrick Roberts and his team from the Max Planck Institute. So it fares better than the conventional theories about the beginning of human civilization, which regularly get disproved by new discoveries.
It will be interesting to see what else archaeology will reveal about the origins of human society in the near future.
Posted by Magister Mortran at 3:52 AM