The Spirit of Neo-Luddism 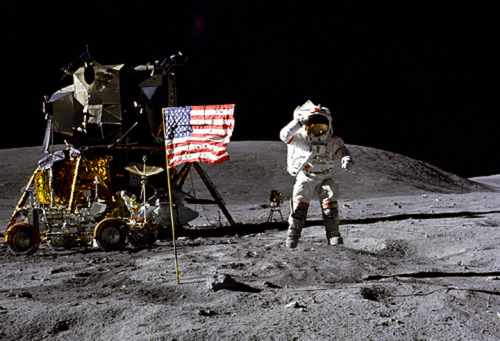 It was almost exactly 50 years ago on December14, 1962 that Mariner 2 reached Venus and sent radio signals back to Earth. But the space age shouldn't last for long. 10 years later NASA launched their last flight to the Moon. Today NASA is criticized for being"lost in space" and having no clear strategy for the future.
What happened with the space program is only the peak of the iceberg of the pathetic situation of mankind today in general. Since the beginning of the 70s there is an apparent decline in technology with only on exception: semi-conductors and computer technology. There can be no doubt that this technology has immensely advanced and continues to advance. But apart from that, there is nothing positive to report.
An entire generation has obviously refused to do anything to advance mankind any further. And this phenomenon is not only visible when it comes to technology but also in the mindset of our current generation.
All this is the result of the irrational neo-Luddite mindset of one generation: the so called "baby boomers". They have brought humanity to an effective standstill and led us on a path back into the medieval Dark Ages.

Why is it that old sci-fi  movies from the 60s look more futuristic than a sci-fi movie of today that only excels in unrealistic special effects that tell no story? This is the spirit of today. The generation of the last decades prefers impossible dream worlds over the real world. They don't care about what is possible or not, because they prefer thrilling entertainment in the safety of their homes. This is what led to the success of computer technology, which enables these impossible dream worlds to become true, even if it is only on a computer screen.The only important thing is that no risks are involved.

Even modern wars must not cause any harm anymore. They are fought remotely with drones controlled from 10,000 miles away on a screen by an employee with an 8-hours office shift. The military obviously very much enjoys playing war, much more than 40 or 50 years ago, when wars were actually dangerous and involved the threat of a nuclear holocaust. But today's wars should not be too real with real casualties on either side. It has become easy and fun to attack another country, since no real risk is involved and its outcome will not change any status quo. It just keeps the usual conflicts going on. Before one side can win, a cease-fire is declared, so both sides can keep their face and go on with their eternal conflict. This is where the generation of today prefers to spend money on, instead of funding space missions.

Humanity is definitely on the wrong track. There is no way that we will ever progress again, if we continue on this path. We have to go back to the way of thinking that was still prevalent in the 60s and start over. Whatever mankind has done since then should be discarded, because nothing good has come out of it.
We need a new positive way of thinking. We have to embrace progress and technology. We have to understand that the future of mankind is in space. We don't need to waste our efforts on Earth. Earth has already been colonized by man. There is nothing more that we can hope to achieve here on this planet.
We need better engines, better energy sources (nuclear fusion) and new visions for the future. We have to get rid of superstition and religion, tribalism, ethical indifference and a nanny state that promotes wrong values. We need to be willing to take risks, to open our minds up for new ideas. We need bravery and courage, not an urge of safety and social security. We have to understand that quality is more important than quantity. It is better to put effort in one expensive but really advanced invention than equipping the masses with cheap junk technology for their entertainment.

If mankind manages to build a colony on another planet, it will be remembered for all human history. But nobody will remember, if we manage to equip everybody on this planet with the latest model of the iPhone,r a flat screen TV with 3D capability or an economic car. We should make positive sci-fi movies about the future, not negative dystopias that are so fashionable these days.
We need to put an end to the spirit of neo-Luddism of the baby boomer generation, or otherwise mankind will have no future.

Posted by Magister Mortran at 7:32 PM