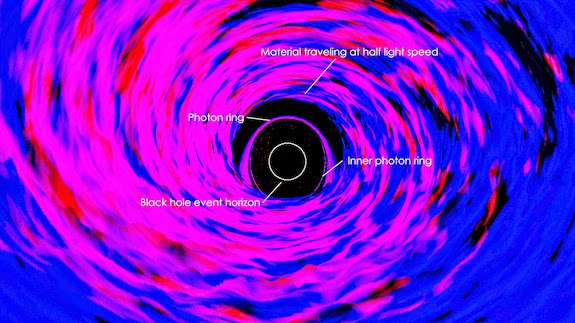 Recently the high-priest of theoretical physics, Stephen Hawking, publicly announced that black holes do not exist in the way as they were so far supposed to do.
Extracts from the article in Space.com:

Stephen Hawking: There Are No Black Holes

Hawking's unpublished work titled "Information Preservation and Weather Forecasting for Black Holes" [...] declares that "there are no black holes."

[The] apparent conflict between what general relativity predicts and what quantum dynamics predicts [...] is precisely what theoretical physicists are trying to understand. This appears to be yet another situation where gravity and quantum dynamics don’t play nice, the solution of which may transform the way we view the Universe.

Hawking thinks that the idea behind the event horizon needs to be reworked. Rather than the event horizon being a definite line beyond which even light cannot escape, Hawking invokes an "apparent horizon" that changes shape according to quantum fluctuations inside the black hole — it's almost like a "grey area" for extreme physics. An apparent horizon wouldn't violate either general relativity or quantum dynamics if the region just beyond the apparent horizon is a tangled, chaotic mess of information.

Now suddenly after so many decades of theories about the physics of singularities, black holes, wormholes and other mysterious stuff that no human being has ever observed but nevertheless has kept generations of theoretical physicists busy with speculations and made astronomers treat black holes as an established fact discovering new examples of them all over the universe, now suddenly even Stephen Hawking has serious doubts that things might not be as theoretical physics has established as a doctrine of faith.
Maybe black holes have no event horizon at all.
Over years one could wonder how theoretical physicists simply could extrapolate gravity equations up to infinity considering that we don't have a full understanding of gravity at all. We can't even explain how galaxies are held together without introducing the mysterious "dark matter". We don't know how general relativity goes together with quantum physics. Nevertheless they extrapolate equations, which have only been proved in gravity fields, which are many magnitudes weaker than what is expected in a black hole.
Nobody has ever made experiments with the Schwarzschild radius of a black hole. Nobody has observed its physical characteristics.
Shouldn't science work the other way around, first the observation, then the theory? Now we have first the theory and then astronomers look for observations who could possibly fit into the theory.
Even the whole concept of a black hole is inconsistent. General relativity tells us that at the Schwarzschild radius of a black hole time is slowed down until its stops, when it reaches the Schwarzschild radius. So actually no object can ever reach the Schwarzschild radius, because time becomes slower and slower. So the event that it reaches the Schwarzschild radius never occurs. For an observer outside of the black hole space around the Schwarzschild radius is bent into an infinite scale. The distance to the Schwarzschild radius becomes infinite. So any object will fall forever and never actually reach the Schwarzschild radius. The redshift becomes bigger and bigger, but light never reaches the point when it would be unable to leave the black hole. Therefore the black hole is deep red at best, but not black at all. Light will never be able to get so close that it could not escape anymore.
And since time has stopped at the Schwarzschild radius of the black hole, it can never grow. It can never change in any form, because time itself has stopped within the Schwarzschild radius. And without time there is no change.
So a black hole, if it existed, would not be able to swallow anything. Matter would just fall forever without reaching its surface.
Now Stephen Hawking has come up with another phenomenon around black holes, a chaos-wall, as the article calls it. It is another attempt to circumvent the event horizon issue.
But why don't we just wait before we understand gravity a little bit better, before we try to answer questions by extrapolation? We don't understand gravity. General relativity has only been proved in weak gravity fields like that of Earth or stars. We don't know if space can be bent infinitely or if there is a maximum limit.
Let's do real science, before we speculate. And science starts with an experiment or an observation and not with an empty paper and some equations. It may be math, but it is not physics.
As long as we have not created a black hole in a lab or a particle accelerator or we have not sent a spacecraft to the next black hole and conducted some experiments with the event horizon, we cannot claim that such things as black holes exist.
Black holes are not science, they are science fiction.

Posted by Magister Mortran at 3:14 AM