Irrational Reaction to a Non-Issue: Homosexuality 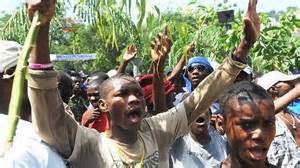 In Africa, especially Nigeria and Uganda, we have currently a strong move to criminalize and persecute homosexuality. Just today a mob attacked alleged homosexuals in the Nigerian capital.
Why can such an irrelevant issue that affects nobody cause such a strong emotional reaction in many people? When the topic is discussed, both sides use totally absurd arguments like it leads to declining birth rates (as if low birth rates would be a problem in face of today's overpopulation) and the claim that homosexuality is a totally "normal" behavior (which it cannot be due to the simple fact that it is a minority phenomenon).

For sure the issue has gotten out of hand. Homosexuality has a long history but was never the cause for so much fanaticism. In ancient Sparta it was the norm, but not a cause for outrage among people of other cultures. It was considered an odd peculiarity of the Spartan civilization but did not cause an emotional reaction.
What is different today?

There seem to be two main causes that this topic has become so important:
We have to get back to a status quo based on reason and common sense. Sexual orientation is a private issue and should not be subject to legal regulations, neither criminalization nor institutionalization. Homosexuality is a minority phenomenon and should not get more attention as less than 5% of the population would deserve.

Mob lynching of homosexuals in Africa is unacceptable, especially since these countries have certainly far more urgent problems at hand. Religious leaders should be held responsible for these actions, not only in the countries where this happens, but also in the West. Hate speech in churches or mosques (and this includes any kind of criticism of homosexuality) cannot be tolerated and must have legal consequences for bishops and imams. Churches and mosques have to revise their stance on homosexuality or should be indefinitely shut down.
It is also unacceptable that Western media and government institutions indoctrinate the people that homosexuality is a normal behavior. It is not, just as any other sexual aberration. Sado-masochism or fetishism are not more or less normal than homosexuality. Neither of it should be subject to criminal persecution, but we don't need a thought police that tells us what we are allowed to think about it.
All of that are private issues. It does not concern any other people than those who practice it. The private life of the citizens must be respected and should not be publicly discussed, neither in a positive nor in a negative way.
If everybody minded only his own business, we would have much less troubles in our society.
Posted by Magister Mortran at 5:28 PM