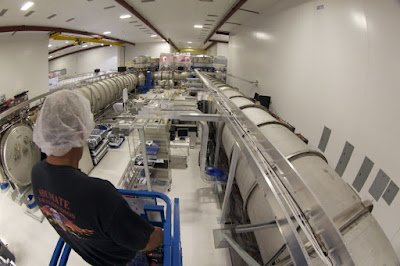 Scientists announced Thursday that they have succeeded in detecting gravitational waves from the violent merging of two black holes in deep space. The detection was hailed as a triumph for a controversial, exquisitely crafted, billion-dollar physics experiment and as confirmation of a key prediction of Albert Einstein's General Theory of Relativity.

Another example of modern pseudo-science and an explanation why science has reached a complete standstill during the last decades producing nothing that had made it into any practical application.
This giant and costly project, whose apparently only purpose of existence was providing a regular income for incompetent "scientists" who knew that they would be unable to produce any tangible results in their lifetime but nevertheless enjoyed the reputation that being a scientist brings with it, now claims that they have actually measured gravitational waves.

The measurement was done by the Laser Interferometer Gravitational-Wave Observatory (LIGO). This is in short words an oversized interferometer (2.5 miles), which is able to detect tiny microscopical length distortions, which are supposed to be caused by gravitational waves. Such an experiment requires a really high degree of precision. 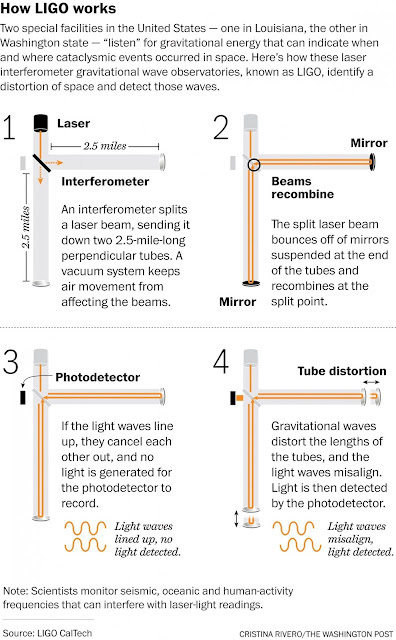 And here we have the first flaw of the experiment. The facility was built on Earth. Apparently these scientists forgot that Earth is a tectonically active planet, apart from all the other environmental influences  that occur there. Therefore it is theoretically impossible to reach such a high degree of accuracy, which would be required for any useful result. Whatever length distortions they may have been measured, is more likely due to some seismic activity rather than two black holes over 5 billion light years away.
I do not even want to go into astrophysical details asking how these mysterious objects called "black holes" are supposed to merge, since we know from General Relativity that time itself slows down at the proximity of a black hole and reaches a standstill at the Schwarzschild radius, the horizon of the black hole.
But whatever event they claim to have taken place hen these super-massive objects merged, we should also have been able to measure more than just gravitational waves. Where was the corresponding gamma radiation in the sky? Not all the energy would go into gravitational waves, a lot must also have been emitted as electromagnetic waves. They could claim it was hidden by a nebula or some other object, but this is a too convenient excuse. Fact is that this LIGO experiment is no sufficient evidence and it is not even theoretically suited to provide such an evidence.

As the article admits, it was a controversial experiment. And there was a lot of pressure on these scientists to come up with some justification for the billion of dollars that they had received.
This project was a waste of money. It did not give us any further insights into the nature of gravity that Einstein had not given us already hundred years ago. Its results will not lead to any practical application and be of no consequence. Neither can they be verified independently by other observations. But this is exactly what today's scientists want: a well-paid job without the need to show anything, which can be verified or put to some use.
We do not need this kind of research. We need nuclear fusion, spacecrafts and MagLev trains. Astrophysics cannot be done from an armchair. Proper astrophysics has to e done in space. If we want to do research on black holes, we have to fly there and watch it from close up. Since we cannot do this, any such research is useless.
The philosopher Epicurus had already thousands of years ago established the proper methodology of science and inductive reasoning in general. There is no absolute truth knowable by the scientific method. Any model or theory that does not contradict any observation is equally valid. we have already a theory on gravity - Einstein's General Relativity. And this theory is valid until we make an observation that contradicts it. We do not need to waste billions of dollars for an experiment that claims to prove it, as long as we have no other observations, which are relevant to us and can support or falsify this theory.
Setting up an experiment that might support a theory or otherwise might be inconclusive is methodically incorrect. A theory is valid as long as it is not falsified. It will not become more valid by such an experiment that could support it but not falsify it.

No, the LIGO experiment has not proved Einstein right. Its results may be in accordance with Einstein's theory about gravitational waves, but they are no proof. A lot of money was wasted that could have been put to better use.

Posted by Magister Mortran at 5:17 AM