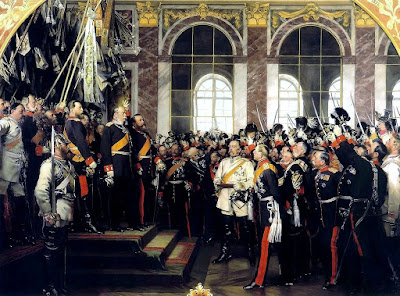 European Nationalism is an idea born in the 19th century after the devastating Napoleonic Wars that caused the collapse of the Holy Roman Empire (Sacrum Romanum Imperium). And there is particularly one nationalism that had disastrous consequences for Europe up to the present day - the German, or better called the Prussian nationalism.

Today's Europeans are told that the population of central Europe forms a distinct nationality, the "Germans" or die Deutschen, as they call themselves. However this so called Germany (named after the former Roman provinces of Germania Maior and Germania Inferior) are nothing but a hegemony of the Prussians who absorbed the northern provinces of what was left of the former Holy Roman Empire after they had defeated the Napoleonic dynasty that held the imperial throne in 1870. The Prussian king William I then declared himself Emperor and created the nation, which is today known as "Germany". But what kind of nation has only existed for 130 years, came out of nothing and currently dissolves into nothing? How can such an artificial entity be called a "nation"?
In order to give this new nation more legitimacy the Prussians and later the nationalist Hitler regime rewrote history and redefined the Holy Roman Empire (HRE) as some kind of predecessor of "Germany", so they could claim a virtual history of more than 1000 years. (1st Reich - The HRE, 2nd Reich - Imperial  Prussian rule, 3rd Reich - National Socialist regime). Hereby they ignored the fact that the Habsburg territory, the core of the former HRE did not even become part of their newly created "German nation". On the other hand it was quite convenient that at the same time Italian nationalists invaded Rome, overthrew the papal rule and created a likewise artificial nation of "Italy".

The consequences of this Prussian nationalism have been disastrous for Europe. It resulted in two world wars, the destruction of the cultural unity of Europe and currently in a massive invasion of Saracen hordes from the Middle East into the center of the continent.
The first action of the Prussian king as soon as he had declared himself Emperor, which was itself legally impossible since he was a Protestant, was turning against the Pope in Rome. Without imperial protection the capital of the former Empire was overrun by Italian nationalists setting up a kingdom in its place.
Next the Prussian dynasty (Hohenzollern) allied themselves with the archenemy of Europe, the Ottoman Turks during WWI. They helped to overthrow the Eastern Emperor, the Tsar, and hereby destabilized the entire East. And even when they were finally defeated by the Western Entente, Adolf Hitler, ruling from the Prussian capital Berlin, did not take long to start another unsuccessful world war in 1939.
Even after their second defeat the worst was still to come. The artificial nation state of "Germany" brought millions of Turkish guest workers into Europe, their former allies in the Great War and for more than 500 years the mortal enemies of European civilization, the barbarians that destroyed the Eastern Roman Empire and until today hold the former Roman capital Constantinople under illegal occupation.
Then, last year in 2015, the Prussians initiated another foreign invasion from the Arab countries. Millions of so called "refugees" (military aged, able bodied, single young men) from Syria, Afghanistan and North Africa have since then flooded European soil, invited by the government in Berlin and causing havoc all over Europe.

This is a result of a false nationalism by a nation, which is none. How can there be any national or European identity in "Germany", when it is based on a lie? The Sacrum Romanum Imperium was not not a first German Empire. Otherwise it would have been called Sacrum Germanicum Imperium. The Holy Roman Empire was the Western Roman Empire. This is why it was called Roman in the first place, just like a can of beans is labelled as "beans", because it contains beans. If it contained pineapple, it would probably be labelled as "pineapple".
The HRE was ruled by the shared power of the pope in Rome and the Emperor, which had no official seat, since Emperors were generally on campaign to protect the borders since the earliest centuries of the Roman Empire. The last Holy Roman Emperor of the Habsburg dynasty never resided in the territory, which is today Germany, but in Vienna, which belongs to Austria. Just a few years before the foundation of "Germany" the Prussians had been at war with the Habsburg dynasty who were the last Emperors of the HRE. So there is absolutely no connection at all between the former HRE and the Prussian hegemony called "Germany" (Deutschland). The Rhine and the Danube have always been Roman since the time of Caesar. Their population is unrelated to the Prussians who came from the Baltic area to central Europe. This can still be seen in the fact that the population of the Rhine and the Danube are mostly Catholic, different from the  Prussians who are Protestants. They do therefore not share a nationality with them.

The term "Germans"in an ethnic meaning would furthermore include the Franks (today's French) and the Anglo-Saxons (today's British), but it does not not include Prussians (today's North East Germany) who are no Germanic people. The names of today's countries Germany, Britain, Belgium, Spain etc refer to the names of the former Roman provinces and have nothing at all to do with any particular ethnicity.

Since the German nationality is based on a lie to begin with, it is not surprising that these so called "Germans" had no problems to abolish their nationality in 1999, when it was decided that anybody regardless of ethnicity who was born in the territory of Germany would become a "German". Since German nationality never really existed except in rewritten Prussian history books, it is only logical that it has now become a multi-ethnic term. Anybody can be a "German": a Turk, an Arab, an Eritrean and sometimes even a European.
The people who have opposed the Western European civilization since their earliest time, the Prussians, are now committed to give the final death blow to Europe. By purposely channeling millions of Middle Eastern and North African peoples into Europe they have created a state of anarchy in European streets with terrorism, state of emergency, systematic Islamization, public mass rapes of European women, violent crime and selective application of the law.

If Europe wants to survive, it has first to overcome this unhistorical nationalism that still rules the thinking of its people. "Germany" is no nation, it has never been one. It would be wise to restore the traditional Sacrum Romanum Imperium, the Western Roman Empire (not necessarily a "holy" one) in order to restore European unity, something that artificial nation states will never be able to achieve.
For this purpose it is necessary to know history, to know that there was no such thing as "Germany" or "Italy" before the latter part of the 19th century. Before this time there was only one Empire, ruled by a Pope and an Emperor, and all the princes and nobles of Europe had somehow family relations with each other. There was a deep rooted sentiment of unity that allowed for minor conflicts among the nobility and their armies but would never have allowed world wars and genocides of Europeans by other Europeans. And it would not have allowed a mass invasion of hostile barbarian hordes.

Nationalism has destroyed the idea of a Western European civilization, and it will continue to do so. There are no European nations, there is only Europe.
And while an "Italian" is no foreigner in "Germany", since he is still on his European soil, a Saracen (Turk, Arab or other Mohammedan) will always remain a foreigner in Europe, no matter how many papers he has to prove the opposite.
A Saracen may become a German or an Italian, which are meaningless words, but he will never be a European. Only a European is a European.
Posted by Magister Mortran at 4:00 AM