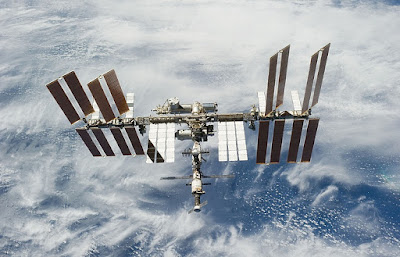 MOSCOW, October 27. /TASS/. Scientists have found living bacteria from outer space on the surface of the Russian segment of the International Space Station (ISS). They are being studied on Earth but most likely they don’t pose any sort of danger, Russian cosmonaut Anton Shkaplerov told TASS on Monday.

According to him, during spacewalks from the International Space Station under the Russian program, the cosmonauts took samples with cotton swabs from the station’s external surface. In particular, they took probes from places where the accumulation of fuel wastes were discharged during the engines’ operation or at places where the station’s surface is more obscure. After that, the samples were sent back to Earth.

Another example of premature claims by scientists, this time from Russia.
It is pretty simple to verify, whether or not an organism has an extraterrestrial origin. If these bacteria have proteins made of the same amino acids as life on Earth and uses the same genetic code, then they are definitely from Earth.
Especially the genetic code, which is based on a particular tRNA that assigns a particular triplet of DNA base pairs to a particular amino acid, which is then assembled by ribosomes to long chains that form the proteins is unique to life on Earth. This combination of base pair triplet and amino acid has developed in a completely arbitrary way on our planet. The same DNA code would not be translated into the same amino acids in organisms that have developed independently on another planet.
We can compare this with a language. If we receive some radio signals on the ISS and they are in English, then we can be absolutely sure that they came from Earth. Because it is impossible that an extraterrestrial civilization would have independently developed the English language. The genetic code is a kind of biological language.

The issue could easily be clarified by sequencing the tRNA in these bacteria, something that could be done within a day. Why has this not been done before making such spectacular claims? And if it has been done, then what is the result? Has a different genetic code been discovered in these bacteria?
The bacteria samples have already been sent to Earth. So there is no reason for not having analyzed the genetic code and the amino acids in the proteins of these bacteria.

This entire story is just another example of the lack of professionalism and the sloppiness that currently prevails among scientists. A lot of modern science seems to aim at spectacular announcements instead of solid research and rational analysis.
Posted by Magister Mortran at 2:25 AM