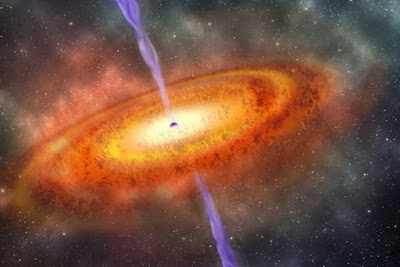 WASHINGTON (Reuters) - The oldest and most distant black hole ever observed -- a celestial brute 800 million times more massive than the sun -- is providing scientists some surprises about the nature of the universe when, on a cosmic scale, it was a mere toddler.

Astronomers on Wednesday said the black hole, residing at the center of a highly luminous celestial object called a quasar, is located about 13.1 billion light years away from Earth. The quasar's light detected by the researchers dates back to about 690 million years after the Big Bang that created the universe, when the cosmos was only 5 percent of its present age.

"This object provides us with a measurement of the time at which the universe first became illuminated with starlight," said another of the researchers, physics professor Robert Simcoe of the Massachusetts Institute of Technology's Kavli Institute for Astrophysics and Space Research.

Finding such a large black hole existing so early in the universe's history surprised the researchers. Its very existence at that point in time challenges current notions about the formation and growth of such objects, they said.

"The universe is full of surprises," Bañados said.

Yes, the universe is full of surprises, especially if you use a wrong model to explain it.

This is just another in an endless series of examples where modern cosmology simply ignores observations when they do not fit into the Big Bang theory.
The Big Bang theory has proven to be completely useless, because it did not make a single prediction that was later confirmed by an observation. All predictions were wrong and needed to be fixe by introducing new variables into the theory, like cosmic inflation, i.e. space expansion faster than light, dark matter, dark energy etc.
Now again they found a remote object, a so called quasar which is interpreted as an early galaxy with a very active super-massive black hole in its center. If the Big Bang time scale was correct that quasar should already have existed at a time when the universe started to become transparent. Before it is supposed to have been a compact cloud of matter too dense for light passing through. These are conditions that would never allow a galaxy or a quasar to exist or to have formed. And still we have just discovered one.
If cosmology was a science, the Big Bang theory would now be discarded and a new theory would need to be developed. However the Big Bang creation myth seems to be unfalsifiable. No matter what is observed, they do not give this theory up, but come up with new explanations just to keep this theory. Falsifiability is the principle criterion that the philosopher Car Popper developed as test for a scientific theory. The Big Bang theory fails this test. It will never be falsified, no matter what is observed or measured.
The universe was found to be completely flat and Euclidic to a error margin of 1%, while the Big Bang theory is only compatible with a curved universe with a finite size. It did not change anything. Globular clusters and galaxies were found that were just as old or even older than the supposed age of the universe. It changed nothing. Now they found a quasar that cannot have existed at such an early stage of the universe. Again it does not change anything. the creationists will still not give up their beloved Big Bang, the moment of creation.
This has nothing to do with science anymore. This has become to be about faith, the firm belief that the world must have had a beginning. But this assumption has utterly been proven false. The universe has no beginning. We have no model yet to explain its overall superstructure, but we know for sure that it did not start at any particular time. This is what our observations tell us.

Unfortunately we have to live with the sad reality that during the decades to come our cosmologists will continue to be puzzled by every new discovery that contradicts the model of a Big Bang. We will see them readjusting the theory, adding more variables ,invisible forces and mysterious stuff. And at the end the priests will tell us that such a precisely fine-tuned universe needs a god as only possible explanation and quote the Big Bang theory as proof of his existence.
Posted by Magister Mortran at 5:05 AM