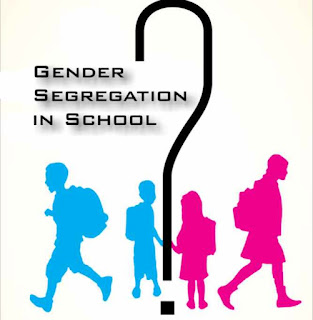 The most important issue that humanity faces in our time of conflict and political polarization is finding a common ground. This common ground can only be reason and logic and has to reject the concept of opinions and beliefs, on which no common ground is possible.
Reason and logic are principles that are the same for everybody, no matter if man or woman, if White, Black, or Asian, no matter from which cultural background. Logic is so universal that it can serve even as common ground for non-human beings like higher animals, computers, artificial intelligence, and extraterrestrial civilizations, if we ever make contact with one.
The task of any school should be to create the foundation of this common ground, to instruct students in reason, logic, and empirical science. It is contrary to this task to teach opinions and belief systems in school or to segregate the students according to gender or race. School should teach us, what is consensus and agreeable for all intelligent beings. If it does not fulfill this task, it is not a true school that deserves this name.
Therefore girls’ and boys’ schools or race segregated schools are no schools at all; they are institutions of cultural indoctrination. And opinions and belief systems should have no business in any school.
Mathematics and scientific facts are universal and the same for any human being. They require essentially the same learning methods, which are based on memorizing information and learning the laws of logic and their application. There is now other way to learn a new language than memorizing the vocabulary, covering one column of a table and trying to reconstruct the other one from memory. This method has successfully been used by any human being, be it a girl or a boy or from whatever race.
Now the segregationists claim that there are natural differences between the sexes as well as between the races. Therefore different methods would be required to teach students effectively according to their gender/race.
But this argument is invalid, since individual differences among humans outweigh statistical differences between the sexes or ethnical groups. If different teaching methods are used, they have to apply to groups based on learning skills in general, not on gender or ethnicity. A boy may outperform any girl in his class, even if it has been confirmed that statistically girls do better in school than boys. It would be unreasonable to put this boy into a boy class with lower standards, just because he is a boy. The skills of a student have to be determined individually, not predetermined based on gender.
The consequences of gender segregated schools are known from our history. It is hardly the teaching methods that are different (The binomial theorem is taught in the exactly same way to boys and girls, just as vocabulary in foreign languages is.), but it is the curriculum. This curriculum is adjusted to the supposed gender specific roles that are later expected for men and women. The result is a society where certain professions are limited to one gender and where social life is split into two worlds, mostly to the disadvantage of women. This means that the society loses all the potential of nearly 50% of its population, which are forced into suboptimal career decisions. This is a completely utilitarian reason independent from any ideological goal of social justice. Gender segregated societies are inefficient, because they prevent people from optimal career decisions for their individual skills.
It furthermore destroys social cohesion by alienating the sexes from each other.
And last not least it diminishes quality of life, since heterosexual people feel naturally more attracted to the opposite gender and perceive a single-sex community as hardship, which is obvious in prisons, the military or monasteries.
If schools do not teach empirical science and the laws of logic equally to any being that is endowed with reason, then it would be better to have no schools at all, because they would be nothing but a tool of indoctrination and brainwashing.
Above anything else we are all intelligent beings, we have the ability to think and act reasonable. Differences based on gender and race are secondary. Logic and science are universal. They cannot be divided unequally among the sexes or ethnic groups.
There cannot be any compromise when it comes to abolishing segregation in schools.
Posted by Magister Mortran at 6:01 PM