Climatology as a Modern Version of Neo-Luddism 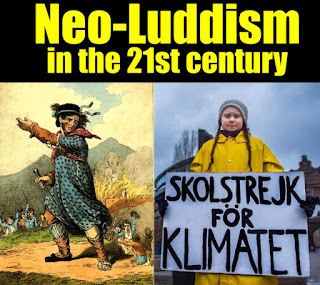 The popular anti-rationalist pseudo-science of »Climatology« and its demand of a reduction of CO2 emissions seems to be a revival of the 19th Century Luddite movement.
The Luddite were radical textile workers that protested against modern technology, especially mechanical stocking frames and had a mystical and probably fictional leader called »Ned Ludd«. The name »Luddite« became since then a trademark for everybody opposing modern technology. Another famous Luddite of the 20th century was the Unabomber Ted Kaczynski who wrote an interesting manifesto called »Industrial Society and its Future«.
Today we have another incarnation of this movement that manifests itself in the fight against Global Warming. It is directed against any form of actually totally harmless CO2 emission, which is a way to quantify the degree of industrialization. The more CO2 something emits, the more industrial it is considered and therefore attracts the wrath of the modern Luddites. Even a new charismatic leader of the Neo-Luddites has emerged in the person of the 16-years old Swedish girl Greta Thunberg and her »Fridays for Future« movement. The fact that a child with no expertise at all on the matter is leading this movement staging a school strike, the symbol of science and reason, shows its general aversion against any form of rationalism. It is hereby very unfortunate that even well established scientists have been corrupted to support the neo-Luddites with absurd theories about threats to the global climate by returning fossilized carbon into the natural cycle where it originally came from.
But we can see that this current phenomenon of climate hysteria is not unique in human history. It had its predecessors that sporadically re-emerge driven by a subconscious skepticism of humans against technological advancement, which they feel they are not prepared for. So the current climate hysteria is not a new kind of the collective madness that has spread in the western world, but part of human nature, which will hopefully be overcome like earlier incarnations of the Luddite movement.
Posted by Magister Mortran at 1:58 AM