Religion Part I - Why Religion? 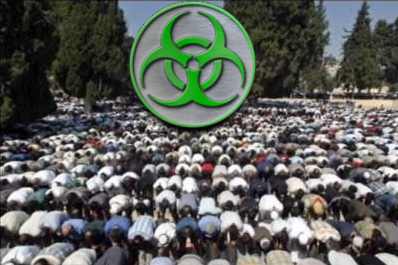 Religion seems to be a unique feature of humans. It cannot be observed inn any other species and has no evident rational purpose. However it can be found in most human cultures and seems to have developed independently. For example there is no evident relationship between the ancient Aztec pantheon and the Mosaic religions.
Since it has originated independently there has to be a reason for it. And since it is limited to humans, there must also be a reason why humans are particularly vulnarable to this kind of behavioral disorder.
One of the best explanations for the phenomenon of religion among human beings was discovered among others by Richard Dawkins.
He describes it as a virus of the mind.
A virus a a piece of information with the ability to copy itself using the resources of a host system. This can be a gene in the DNA of a biological organism that has become independent from the rest of the genom and is just interested in copying itself without consideration of negative effects to the host organism. So the piece of information has become an entity in itself following only its own interests without being part of the functioning organism of its host.
The same applies to computer viruses, which were the second case where viruses were observed. A computer virus is a piece of information in an electronical data storage media that is only interested in copying itself without consideration for negative effects on the computer system and its purpose. So it is also an independent entity following its own interests  without being part of the functioning host computer system.
Religion is a another kind of virus. It is a piece of information in the human mind with the ability to copy itself to other human beings using the resources of the host mind. It is also an independent entity followingg only its own interests without consideration of negative effects for the human host.
Thereis also a reason why only human beings are affected by this kind of virus. More than any other species humans use the accumulated experience of previous generations to optimize their behavior in order to survive in their environment. Other species rely mostly on inherited knowledge (instincts) or personal experience in order to make optimal decisions when confronted with a problem. Humans have rely mostly on knowledge wich has been communicated by previous generations to them.
This is a certain advantage. It is the reason why not every individual human being needs to invent the wheel again. An invention only needs to be done once by a single human and is then communicated to other humans and to following generations. This ocurrs as well through spoken language as through written documents.
In order to gain this ability to aquire knowledge from previous generations as fast and efficient as possible, human children believe without questions what their parents or accepted authorities tell them. This allows them to aquire in a very short time the accumulated knowledge of previous generations. No effort is done to verify the received information because it would slow down the process and the majority of the information can be trusted simply by the fact that previous generations were successfully able to survive using this information. Wrong information, which would be very harmful would not be able to be communicated to the following generation, since it would have resulted in th edeath of the individual before being able to communicate this wrong information. However wrong information, which has no or only a minor negative effect on the survival can easily be transmitted to the following generations.
This is a vulnerability, which is exploited by special viruses like for example religions.
Or as Richard Dawkins describes it:
"Natural selection builds child brains with a tendency to believewhatever their parents and tribal elders tell them. Such trusting obedienceis valuable for survival. [...] The flip side of trustingobedience is slavish gullibility. The inevitable by-productis vulnerability to infection by mind viruses."
Through the process of evolution, the survival of the fittest, those religions, which are optimized to spread fast and efficiently are those, which are most successful today, the so called world religions. They have slowly eliminated competitor religions and now dominate the world.
They have all the features, which are necessary to ensure that they spread efficiently to the biggest possible number of individuals.
Due to these biological reasons it is very difficult for a human being to free itself from the religious virus, once he has been infected. However when a human learns to use his ability for rational thinking and give it priority over his emotional inclinations, it is easily to achieve. Reason and logic are independent from biological needs and enable those who use them, to overcome their biological dispositions.
This is why there is a small minority of mentally healthy human beings who are not infected by religious viruses. However biology can explain why the majority still suffer from this mental disease.
The nature and mechanism of religion needs to be understood first. It is useless to dispair over human ignorance. There is a reason why humans behave just like they do. When we have understood this, we can start to think about the consequences that result from it and how to handle them.
Posted by Magister Mortran at 8:05 PM

Email ThisBlogThis!Share to TwitterShare to FacebookShare to Pinterest
Labels: Virus of the Mind