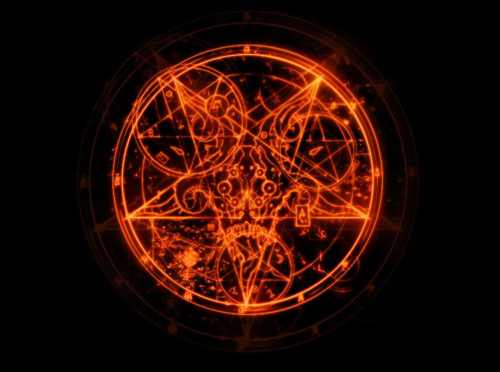 The different philosophical payloads of religious viruses are sometimes divided into 2 classes: The Right Hand Path (RHP) and the Left Hand Path (LHP).
Originating from a classification of Tantric traditions (dakshinachara and vamachara) this classification has recently been used to describe the distinct approach that religions or philosophies have in general. This classification can equally be used for secular and religious philosophies, because we are only dealing here with the philosophical payload of religions, not with the religious practices and traditions that constitute the reproductive viral element of religion.
Both approaches are based on two contrary premises - the concept of collectivism and the concept of individualism. Depending on which of these two premises a belief system is based on, it will necessarily go into a completely different direction.
The path of collectivism, of altruism, of integration with the divine is the Right Hand Path; while the path of individualism, of selfishness and of preservation of the self is called the Left Hand Path.


This is how the classification is commonly understood, but the phenomenon of religion is far more complex and interesting.
In fact we have both aspects, Right Hand Path and Left Hand Path in most world religions.
We have the theoretical philosophy, which is taught by theologists and clerics (RHP) on the one hand and we have the daily rituals, which cater to the daily needs of the less religiously educated people (LHP), the folk religion. Sometimes this folk religion openly contradicts the teachings of the official religion.
Examples:
In Christianity, especially Catholicism, we have the worship of the saints leading sometimes to such extremes like Voodoo or Santeria, which almost form distinct religions, although they are firmly embedded into a Christian belief system. These saints or lwa in Voodoo are worshiped for individual benefits. The worshiper makes his offerings to the deities in order to gain a personal advantage disregarding the tenets of Christian monotheism.
This cult does not make any reference to a moral system and is only for personal advancement. It is widespread among Catholic or Orthodox Christians, especially in Latin America, but also in Italy and Spain.
The worship of saints occurs mostly hidden and is often formally denied by many practitioners. It clearly shows the characteristics of the Left Hand Path, although it is part of a formal Right Hand Path religion.
The saints are often gods from former polytheistic religions, which have been suppressed by Christian monotheism. By taking the image of Christian saints, the former pagan religions still survive within Catholicism.
In Buddhism we have the folk religion with small temples dedicated to personal or local gods where incense sticks are burned in order to gain luck and protection, which is in obvious contradiction to Buddhist philosophy that preaches overcoming worldly needs and desires. This small temples can often be found in homes or small businesses, including bars and brothels. This is an obvious contradiction to Buddhist asceticism.
Just like their Christian counterparts, Buddhist believers often deny or downplay that they actually worship these folk deities, however they still believe in their effectiveness. In Buddhism this parallel folk religion is still far more public and openly visible than in the more restrictive monotheist religions.


Even the strictly monotheist religion of  Islam is not free from parallel folk religions. When visiting one of the ancient temples in Egypt for example, you might meet Muslims who secretly perform rituals to the ancient Egyptian gods. These gods are mostly interpreted as jinns and like the Christian saints in this way integrated into a monotheist system. The practice is considered some kind of witchcraft and harshly condemned or even persecuted in Islam. But even those who condemn it, often  believe that it might have some effectiveness.
Since Islam is far more restrictive than the other mentioned religions, this practice is driven underground. But its existence proves that even among Muslims there is a need for some kind of Left Hand Path parallel cult.

What we can see is that  the Left Hand Path/Right Hand Path classification of religions has its flaws. There are aspects of both in most of the major world religions. Religions are catering to different psychological needs of their followers and have therefore different and sometimes even contradictory aspects.
The theoretical teachings of a certain theology have often little in common with the way a particular religion is actually practiced.
The Left Hand Path aspect is meant to benefit the individual practitioner and usually doesn't involve any ethical system. It is not meant to influence the society and often denied and hidden from public with no intention to proselytize. It is actually a personal superstition with personal benefit as its only ambition. This makes it harmless for the society.
The Right Hand Path aspect of a religion on the other hand is the one which includes a system of ethics that the religion tries to impose on the society. This is whats makes a religion a highly dangerous virus. It wants to spread itself by proselytizing and by changing its host society to fit its needs. This virulent aspect makes it a danger to everybody in the society.

There is another important classification: Revelation and Tradition.
Ancient religions were always based on tradition. Their tenets, ceremonies and religious practices grew and changed over centuries. They adapted to new social developments and were no major obstacle for social progress, science and technology, since they were based on alleged knowledge of former generations combined with self-acquired knowledge. Priests and scholars permanently worked in elaborating the religious system and adapting it to knew knowledge.

Most modern world religions however don't belong in this category. They are based on revelations to particular humans who later became the founders of their religion: Moses for Judaism, Zarathustra for Parsism, Jesus for Christianity, Mohammad for Islam, Siddhartha Gautama for Buddhism, Baha'u'llah for Baha'i. All these religions have their unalterable holy scriptures and have been severe obstacles for social progress, since they are not willing to integrate new knowledge into their doctrines.

While religions based on traditions develop evolutionary like a virus, which is subject to mutation and biological selection in order to optimize itself, religions based on revelations are like a virus, which has been genetically designed in order to be more virulent, e.g. to be used as a biological weapon. Or to use the example of a computer virus, they have been programmed for malicious purposes like a computer trojan.
Religions based on revelations are artificially designed religions, created by some power-hungry individuals for their own needs, optimized to spread as fast and efficient as possible. This is the reason why these religions have proven to be superior to traditional religions and are dominating the world after having displaced the traditional religions.

For those who are not infected with this kind of mental virus, the most important classification of religions is their grade of virulence. We don't need to care about what other individuals believe as long as their believes don't affect us. It may be unfortunate that so many humans waste their lives by being subject to irrational superstition, but it would be intolerant to interfere with their faith as long as it doesn't affect others or the society in a negative way. However when a belief system affects the society and others, then it becomes a threat. Therefore LHP religions are irrelevant, RHP religions are not. Or to put it in other words: The LHP aspect of a religion is harmless, the RHP aspect is dangerous.
The grade of virulence is also determined by the issue, whether a religion is based on tradition or on revelation, the latter type being far more virulent than the first one.
Therefore the focus has to be on Right Hand path religions based on revelations, since they pose the biggest threat.
Posted by Magister Mortran at 8:12 PM