The concept of independent fields of reality can also help us to understand the paradox that led to Albert Einstein’s Theory of Relativity, which is the other important pillar of modern physics that revolutionarily replaced the old paradigms of Newton’s mechanics.
It is the observation that light has always the same velocity; no matter if the light source is moving or not that contradicted the traditional worldview of classical physics.  Surprisingly the speed of a light source does not add to the speed of light, although a second observer moving together with the light source can measure that the light is emitted with the same speed as if the light source was not moving. Therefore it cannot be determined if the first observer who sees the light source moving relative to him, is moving himself or the light source is moving. There is no absolute movement. Every movement can only be defined relative to a reference system, i.e. a particular observer.
As a result moving objects experience an effect called time dilatation. This means the time of a moving object is passing slower than of an object, which stands still in relation to the observer.
For example the clock in a spaceship that moves with relativistic speed is slower than a clock on earth. To illustrate this effect, let’s make a simple thought experiment.
Mr. Smith on Earth wants to send a parcel to his friend on a planet in Alpha Centauri, which is 4.37 light-years away from Earth. An interstellar courier service advertises to be able to deliver any parcel in less than 2 years and 3 months to Alpha Centauri. So on October 1, 2997 Mr. Smith gives the parcel to the captain of the courier spaceship expecting it to be delivered before New Year 3000.

The captain takes the parcel on board his spaceship and accelerates it to what he measure to be twice the speed of light, confident that he is going to deliver the parcel in time.
After 6 months, on April 1, 2998 according to the board calendar the spaceship passes the periphery of the Oort cloud behind which is about one light-year away from Earth. So the captain of the courier ship concludes that he has successfully traveled 23% of the trip in just 6 months and will therefore arrive in time on Alpha Centauri.
However an observatory on Earth is watching his trip and calculates that the spaceship is only traveling at a speed of 89 % light speed. 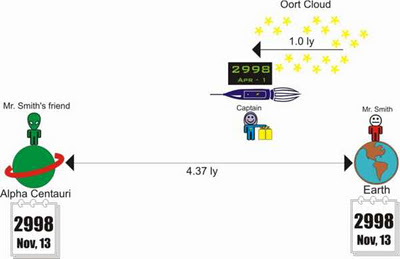 As expected according to Einstein’s Theory of relativity, nothing can travel faster than light. So the courier spaceship will not be able to do this either. But since the courier is traveling with relativistic velocity, time is passing slower on board of the spaceship. Therefore he measures a far higher speed than the observer on Earth. This speed is called proper velocity and is the distance as it appears to an observer on Earth divided by the time passing on board the spaceship.
The equation for the proper velocity (ω) is:
In order to reach a proper velocity of twice the speed of light (ω = 2c) as the captain of the courier ship calculated he needs an actual velocity of 89% (Ö0.8) the speed of light measured from Earth, as we can see, when we replace the variable v with Ö0.8   c.

When the courier spaceship reaches Alpha Centauri, the board calendar shows December 7, 2999 more than 3 weeks before New Year 3000. So the captain concludes that he made the trip from Earth to Alpha Centauri in 2.185 years as expected. But when he delivers the parcel to Mr. Smith’s friend, the calendar on Alpha Centauri as well as the calendar on Earth shows August 21, 3002, more than 2 ½ years after the promised delivery time.

Of course Mr. Smith and his friend are upset about the delayed delivery and file a complaint, while the captain of the courier ship refuses any responsibility and insists that the parcel was delivered in time.
When the case goes to the interstellar court, the captain of the courier spacecraft proves his point with the spaceship’s logbook and the board calendar, which both confirm that the parcel was delivered in time, while Mr. Smiths friend can prove that he received the parcel not before August 3002, over 2 ½ years too late.
So what decision would an objective and neutral judge make?
Is the spaceship captain right? Is Mr. Smith’s friend right? Are both of them wrong? Can’t there be only one truth? 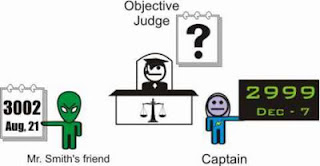 No, in fact both of them are right.
There is no objective truth and no objective reality. There are only subjective realities.
In the world of the courier ship only 2.185 years have passed, but on Alpha Centauri and Earth 4.886 years have passed. There is no objective time. There is only subjective time, because there is only subjective reality.
The subjective world of the spaceship has been consistent with itself and always followed classic Newtonian mechanics. In the same way the world of the two planets Earth and Alpha Centauri has been consistent and followed classic Newtonian mechanics. But when the courier ship accelerated to relativistic speed, its world disconnected from the other world. And when it connected again with the world of the stationary planets after arriving on Alpha Centauri, the world where it arrived was not consistent anymore with the world it left, because both worlds were disconnected for too long time. The two time scales of both worlds have been distorted and didn’t fit together anymore using the Newtonian laws of physics. The relativistic effect of time dilatation has disrupted the common reality between both worlds. So suddenly two contradictory statements about the duration of the trip from Earth to Alpha Centauri can both be true contradicting the basic laws of logic.
Of course the statement of the captain of the courier ship is not true in the reality sphere of Mr. Smith’s friend, just as the statement of Mr. Smith’s friend is not true in the reality sphere of the spaceship. In each world for itself the laws of logic have not been violated. The problem results from the fact that we are talking about two different realities, two subjective realities. There is no objective reality. Outside of each observer’s reality sphere, there is no reality, as it is commonly understood. Every observer, every consciousness is a world in itself. He exists in his own world. He is the center of his world. There is no objective reality between the different worlds of the observers. Only his own world is real for every observer.
Sometimes the different worlds touch and overlap each other. Then the observers interact with each other. Then we get the phenomenon as described above. Real is only what an observer observes himself. The world ends, where his observation ends.
With the simple assumption that every observer is the center of an independent world, we can simplify our concept of the universe. We can explain all the phenomena that the Theory of Relativity and Quantum Mechanics try to describe under the assumption of a common universe for all observers. But without the concept of a common objective reality, everything becomes suddenly easier.
And it changes our view of the world. We are not one out of myriads of beings in a huge common world. We are the center of the world – the center of our world. But our world is everything, which is. There is no reality beyond the limits of our world. There are possibilities, and there may be other worlds, but we are independent from them, and we don’t share a common concept of reality.
This view of the world suddenly gives our self a much higher importance. We are not a small object in a vast objective universe, we are the center of the world, and there is no such thing as an objective universe.
Our observation is what makes things become real. Without our self as observer, the world cannot be. Without our self as observer, there are only undetermined possibilities as described by the Copenhagen Interpretation of Quantum Mechanics.
Posted by Magister Mortran at 2:02 AM