Quantum mechanics explains these phenomena in the following way: The location or the state of the particle is described by a wave function, which was first discovered by the Austrian physicist Erwin Schrödinger in 1926.

This wave function does not give a particular location for the particle in our experiment. Nevertheless we can detect the particle at a distinct location when it is measured by arriving on the screen.
Schrödinger described this paradox in a thought experiment involving a cat.
Schrödinger’s Cat 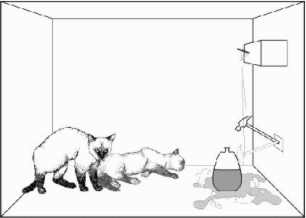 “A cat is penned up in a steel chamber, along with the following device: in a Geiger counter there is a tiny bit of radioactive substance, so small, that perhaps in the course of the hour one of the atoms decays, but also, with equal probability, perhaps none; if it happens, the counter tube discharges and through a relay releases a hammer which shatters a small flask of hydrocyanic acid. If one has left this entire system to itself for an hour, one would say that the cat still lives if meanwhile no atom has decayed. The psi-function of the entire system would express this by having in it the living and dead cat mixed or smeared out in equal parts.”
If we don't attribute the quality of being an observer by itself to the cat, it would indeed mean that the cat is at the same time dead and alive as long as we don't come back to check the actual state of the cat. In the real world we would actually never see a half-dead, half-alive cat. The cat would either live or be dead, when we return to observe the outcome of the experiment.
How can this contradiction between the Schrödinger equation and the physical world that we observe be interpreted?
Today's physics has currently several possible explanations for the paradoxes described in the experiments above. The two most common ones are the Copenhagen Interpretation and the Many-World-Interpretation. Most physicists are inclined to accept the Copenhagen Interpretation, however we should have a short look at the alternative explanation, which is also supported by many scientists.

Many-Worlds-Interpretation
According to this interpretation in each case of a non-deterministic event, this means when the wave function of the Schrödinger equation offers more than one possible outcome, our world splits in distinct parallel worlds. In the case of the double-slit experiment the world would split in one world where the particle passes through the left slit and another one where the particle passes through the right slit. For a short period of time the two worlds are still interconnected and can interact with each other, so that we get the resulting interference pattern on the screen. But then the worlds are irreversibly separated and continue their own path of events.
So in one world Schrödinger's cat would die, in the other one it would survive. Depending on which world we are, we would see the one or the other outcome.
Since such non-deterministic events occur in an incredible number every millisecond, the universe would permanently split in an uncountable number of parallel universes where every possible outcome of events occurs. Everything, which is only remotely possible, would therefore happen somewhere in some of the almost infinite number of alternative universes.
This may sound like a strange idea from a science fiction novel, but it has a certain advantage over the mainstream Copenhagen Interpretation. It does not need to introduce the only vaguely described concept of measurement or observation and does not need to explain how it stands out from the non-observed world.
Nevertheless most physicists today prefer the Copenhagen Interpretation to explain the phenomena of quantum mechanics.
Copenhagen Interpretation
The Copenhagen Interpretation can be summarized as the statement that the process of observation (measurement) causes a collapse of the wave function, which then results in a distinct state of an object. In our example of the double-slit experiment this means, that the particle has no distinct path through the slits, while it is not observed. But as soon as we measure the location of the particle and put a detector at the slit, which tells us, where the particle passes through, the wave function collapses, the particle gets a distinct location and consequently there is no interference pattern created on the screen.
While the world is just a wave function of possibilities with different probabilities, this means not actually real, when unobserved; the act of observation makes it suddenly become real and taking a distinct state and a distinct location. The wave function collapse is what makes things become real. Before this collapse the world is just a field of probabilities.
In the case of our cat, it would indeed be dead and alive at the same time, as long as it is not observed (supposed we don't count the cat itself as an observer). Then suddenly it takes a distinct state caused by the fact that we observe it after coming back. It means the cat is not really there, when nobody looks. It is only there as a cat in a particular state, when we look at it.
Following this interpretation it means that the world is not actually real. It is a huge field of probabilities. It becomes only real due to our observation. We are creating the world by observing it. So it is not, as many materialists believe, that we depend on the physical world, that our consciousness is the result of the physical world. Quantum mechanics has shown that the physical world depends on us. The physical world is the result of our consciousness.
We are now entering an interpretation of quantum mechanics, which goes even further than the Copenhagen Interpretation. This interpretation is called "Consciousness causes collapse". It seems to be the logical consequence of the Copenhagen Interpretation. Because the Copenhagen Interpretation falls short of explaining its essential question: What is "observation"? When is something observed, when is it unobserved?
The "Consciousness causes collapse" interpretation answers this question by introducing the concept of consciousness. It also solves the philosophical and religious questions, what consciousness actually is. According to this interpretation, consciousness is what causes the wave function collapse.
So finally we can answer the question: Who has a soul, only humans, or also animals and plants? The answer is: Whatever can cause the collapse of the wave function.
The only problem with this answer is that there is no way to find out, if somebody or something can cause the collapse of the wave function by himself alone or if it just collapsed after we looked to find out the result of the experiment. Since we cannot think about a way to prove it experimentally, the "Consciousness causes collapse" interpretation is often considered to be pseudoscientific and rather belonging into the field of philosophy than physics.
In the next part let's therefore forget the concept of "consciousness" for a moment and go back to the Copenhagen Interpretation and its implications.
Posted by Magister Mortran at 1:38 AM