Metaphysics Part I - The Nature of Light and Matter 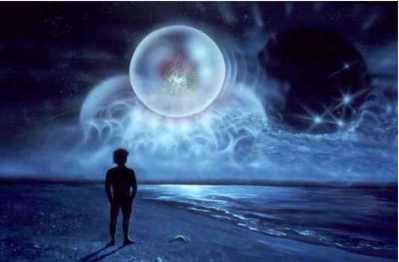 It is a common misconception to take the physical world for real. Out of this misconception physics is considered hard science because it deals with the real facts of nature. Idealistic concepts like the mind and the soul or things like that are considered speculation at best and not actually scientific facts.
However modern science teaches us that this is not true. This view of the world, which is still common among the majority of people living today, is based on Newton's mechanical and deterministic worldview. The world was somehow considered to be a giant, immensely complex mechanism, consisting of distinct things or particles that interact in a way together that can mathematically be calculated and predicted. This is how most people still believe the world to be.
However since the beginning of the 20th century and the discovery of quantum mechanics, this worldview has turned out to be wrong.
It has more and more become clear that the physical world is actually not so real as it was supposed to be. It does not consist of distinct things. Nothing that we see or feel in the physical world actually exists, when we are not looking. It is not really there. It only is there, while we look at it.
This is one of the most mysterious and surprising discoveries in the history of science; and strangely enough very few people are aware of this fact and its consequences, even among physicists. And this is not some metaphysical theory; it has been proven by some simple experiments.
Double-Slit Experiment 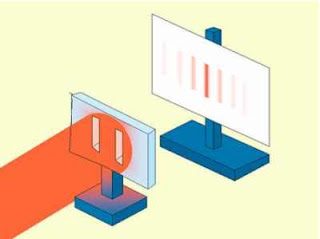 The key experiment of modern physics that changed our understanding of the world is the double-slit experiment. It was first set up to prove the wave nature of light, but it turned out to have some amazing results.
In this experiment a beam of light is sent through two slits, which are close together. Then the resulting light pattern is observed on a screen (picture on the right).
If light simply consisted of particles, we would expect to get two vertical lines on the screen, one for each slit. However what we actually get is an interference pattern resulting from the light waves passing through the two slits and interacting with each other. 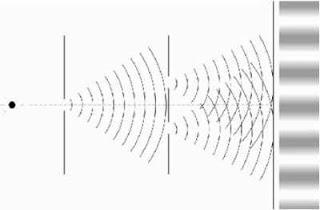 The second picture on the right explains how two waves originate, one at each slit, and create an interference pattern, just as we would expect it, when we throw two stones into water. The result is a major number of vertical lines on the screen depending on the distance of the two slits from each other.
The experiment was first considered to be a proof of the wave nature of the light, since particles would behave in a different way. Nevertheless this experiment can be done in the same way with electron beams and even beams of larger objects like atoms. Since electrons are matter and not simply light waves, it was not easy to understand what this means.
On the other hand the physicists knew that even light always comes in individual and separate units, called photons. So those who believed that light consists of distinct particles didn't give up that easily.
The experiment was modified and the intensity of the beam was dimmed down, so that only one electron (or photon) at a time passed through the slit. The individual particle could later be observed arriving on the screen, so that there was evidently only one particle at a time in this experiment.
However the outcome of this experiment was even more surprising, because it made no sense at all, given the worldview of classical physics.
The particles passed through the slits one by one, but over time they still built up an interference pattern on the screen (see below). 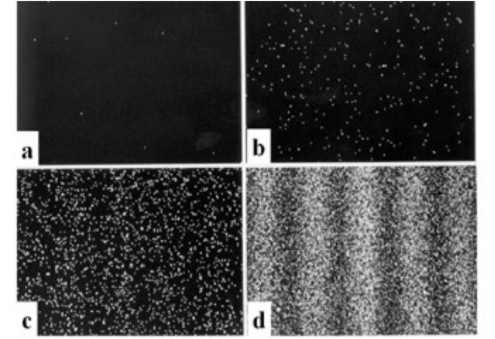 How can interference happen, when there is only a single particle at any given moment of time? Which other particle could it interact with, considering that any kind of interference is by definition an interaction between at least two things or waves and there was no second particle in the experiment?
A particle was supposed to pass either through one slit or the other or neither of them. But the interference pattern indicated that it passed through both of them in order to interact with itself. Nevertheless the particle did not split in two, because it still arrived as a single particle on the screen on the other side. Only the statistic pattern indicated that there must have been an interaction. Otherwise we would not see these interference lines.
To investigate this phenomenon further, the scientists had to have a closer look through which of the two slits the particle actually passed. But when they installed a detector at one of the slits in order to determine exactly where the particle went through, the interference pattern simply didn't show up. The photons were cheating. As soon as the scientists had a closer look, what the photons were actually doing, when passing through the double slit, they didn't do anything special, and the surprising phenomenon did not show up on the screen. It was like the photons or electrons knew that they were observed, and therefore they didn't do their secret trick anymore.
This is called the observer-effect. It means the fact that there is an observer, changes the way, particles behave.
When nobody was looking, the particle did not pass through a particular slit, neither the right one nor the left one. It went through both of them at the same time in order to create the interference. This obviously means the particle was at no distinct location.
While we are talking here about microscopic distances between the two slits, there is another experiment, which proves that the location of a particle cannot be determined even in macroscopic scales.
Interferometer Experiment
The interferometer below consists of a light source, two fully reflecting mirrors and two semi-transparent mirrors. A semi-transparent mirror is a piece of glass, which reflects 50% of the light, while it passes through the other 50% of the light. Or when we talk about photons, we can say: Half of the photons pass through and the other half is reflected. Which of both events happens, is totally random. 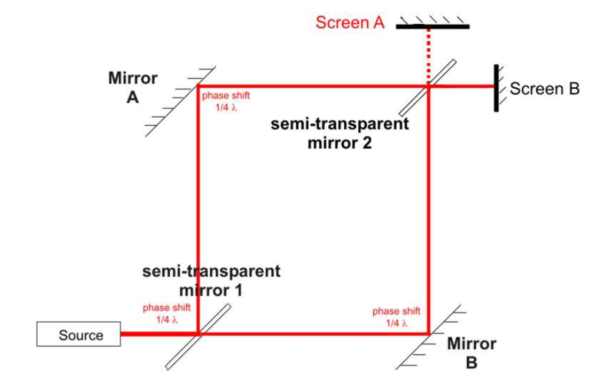 So in our experiment light is first emitted by the light source. When it hits the semi-transparent mirror one half of the light passes through, while the other half is reflected towards mirror A. The light beams are then respectively reflected at the mirrors A and B towards the semi-transparent mirror 2. Half of the light passes again through this beam splitter, while the other half is reflected. So we would expect half of the light being detected at screen A, while the other half would be detected at screen B. But this is not what happens. In fact only at screen B, light can be detected. No light arrives at screen A. Light never passes through the path indicated by the dotted line.
Why does this occur?
To understand this experiment, we have to know that the phase of light is shifted a quarter of a wavelength, when it is reflected, while it isn't shifted, when it passes through the semi-transparent mirror. We need also to understand the principles of interference.
If we have two coherent light waves, which are totally in phase, they amplify each other. This means their resulting amplitude is added (see below). We call this constructive interference. 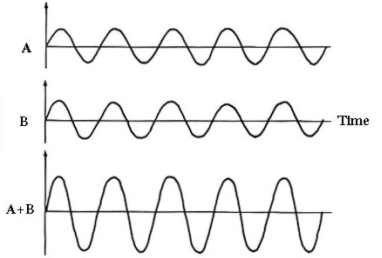 If we have two coherent light waves, whose phase is shifted half of the wavelength, then they cancel each other out, because each peak of one wave goes just together with a trough of the other wave, so that they nullify each other (see below). This is called destructive interference. 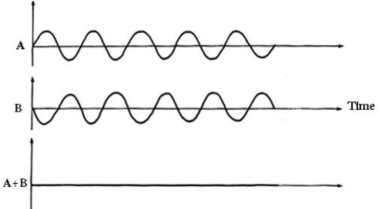 Now let’s go back to our interferometer experiment and see how the phase of the light waves are shifted and the result of it.

There are four theoretically possible paths the light can take:
Each time the beam is reflected it causes a phase shift of ¼ wavelength. Therefore both possible paths that will take the light to screen B (path 2+3) are shifted 2 x ¼ wavelength (total phase-shift ½ wavelength). Since both beams are shifted in the same way, they are still totally in phase relatively to each other. This means they amplify each other and we have a constructive interference.
On the other hand the two possible paths that lead to screen A (path 1+4) are reflected either once or three times. This means one of them has a total phase shift of ¼ wavelength and the other one has undergone a total phase-shift of ¾ wavelength. Relatively to each other it means that they are ½ wavelength phase-shifted. And as we have seen above this means they cancel each other out. Therefore we will never see any light at screen A.
Now let's modify the experiment a little bit and dim the light beam down like in the double-slit experiment, so that only one photon at a time passes through the experiment. What will happen? We would expect that the photon can take any of the four paths described above. If it takes path 1 it cannot be cancelled out by a photon taking path 4, because it is the only photon, which is in the interferometer at this moment.
Nevertheless in reality no photon will ever be detected at screen A. All photons arrive at screen B. How is this possible? How can the photon be cancelled out passing through path 1 and 4, when there is no other photon present in the interferometer?
The only possible explanation is that the photon takes no particular path. It passes through all paths at the same time and then causes an interference with itself. This means that the photon has no distinct location, when it passes through the interferometer.
In quantum physics this is called "superposition". It means that all possible locations of the photon are superposed on each other. They are equally valid locations. The photon takes the path of mirror A at the same time as it takes the path of mirror B.
The concept of physical reality becomes obsolete. The location of the photon on the path through mirror A is as real as the location on the path through mirror B.
Posted by Magister Mortran at 2:05 PM